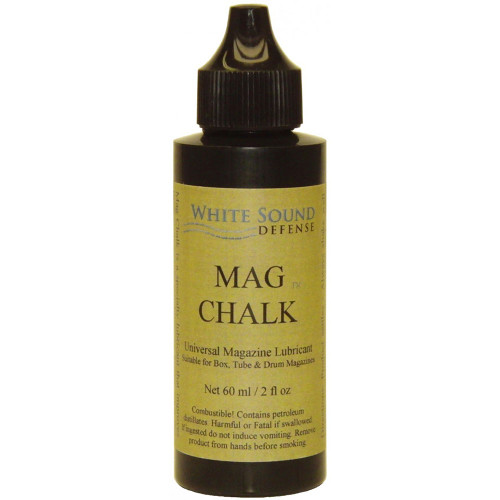 
Mag Chalk™ is a specialty lubricant designed to improve the reliability of firearms by reducing magazine related failures. This purpose-formulated lubricant does not hold grit, is waterproof, and is engineered to effectively lubricate the types of fouling that are most likely to cause malfunctions. It will not contribute to corrosion like graphite or molybdenum disulfide (moly). It goes on wet and dries to a chalky film that 'sheds' as it comes into contact with particles of grit. It is suitable for use in all temperature ranges down to -40C. It is ideal for lubricating all types of magazines including tube, box, drum, etc.

Poorly functioning magazines are a common cause of malfunctions in modern firearms. In sandy environments friction and fouling can cause rounds to advance sluggishly, resulting in the slide or bolt overriding the base of the round. In severe cases the follower may bind or jam preventing the magazine from feeding at all. In cold weather environments frost can form inside a magazine causing it to jam. A proper lubricant can greatly increase the environmental tolerance of the magazine.

Traditional wisdom has been that little or no lubrication should be applied to magazines to avoid attracting dirt and grime. This concern is understandable as experience has shown that even supposedly 'clean' lubricants fail to function correctly in a magazine. And unfortunately, the few that do avoid attracting grit, lack the ability to effectively lubricate the larger particles that cause most malfunctions.

Up until now the best option was to use powered lubricants such as graphite or molybdenum disulfide (moly) in an effort to get effective lubrication in magazines. However graphite, while a decent lubricant, encourages galvanic corrosion in steel and aluminum, so to some degree you are trading one problem for another. On the other hand, moly tends to cause acidic corrosion on surfaces it is in contact with. Neither is an ideal solution and neither holds up particularly well in wet environments.

The solution developed by White Sound Defense is a liquid product that dries to a thick waterproof semi-solid film that 'sheds' as it comes into contact with particles of grit. It is unlike any grease or lubricant used for general firearm lubrication. The product also forms a thinner highly durable lubrication film that bonds to the internals of the magazine itself.

Mag Chalk™ was designed and developed start to finish to do one job – reduce magazine related malfunctions no matter what the environment.