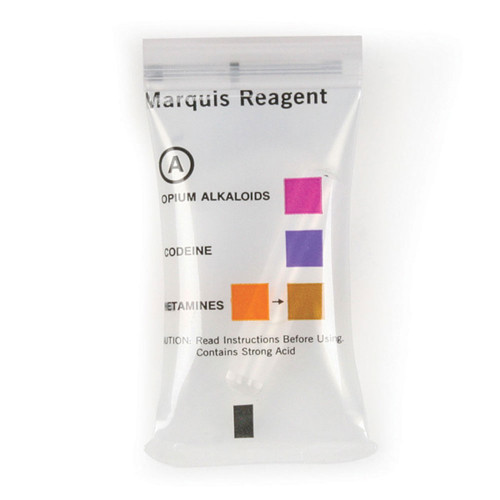 Self Contained, NIK test come with pre-filled ampules which eliminate the need to measure, mix. or dispense reagents. The reagents, which do not have a predetermined shelf life will change color to indicate positive substance identification. Test are completed quickly and accurately, most within a minute. The color coded indicator on the test pack provides quick visual interpretation of test results.

The NIK® System of Narcotics Identification was developed as a means of rapidly screening and presumptively identifying substances suspected of being illegal drugs. Designed to be a completely self-contained system, each test provides all necessary elements to perform chemical colorimetric tests for commonly known and frequently abused narcotics and dangerous drugs. Marquis Reagent is a primary general screening test for the presumptive identification of Opiates (Morphine, Codeine or Heroin), Demerol, Black Tar, Amphetamine-type compounds including Methamphetamine & Methylenedioxymethamphetamine (MDMA or Ecstacy), Amphetamines and as a general screening agent for other drugs.