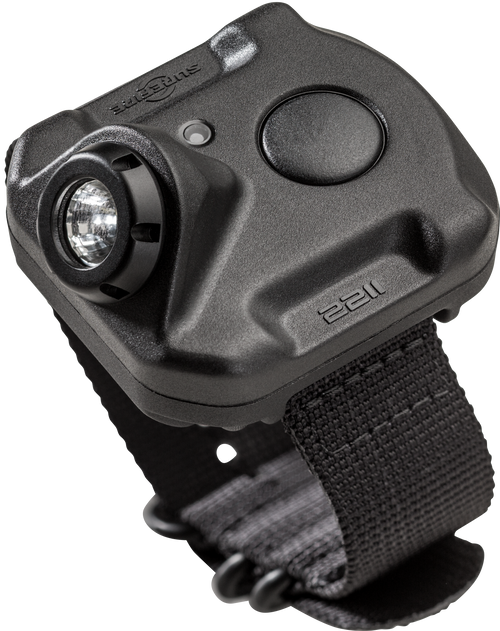 The rechargeable SureFire 2211 Wrist Light is a lightweight, cutting-edge tool that provides hands-free tactical illumination for a broad range of lowlight scenarios-including use with a handgun. When strapped to your support-side wrist, the 2211 automatically aligns with a handgun when the weapon is held with a standard two-handed grip, projecting sufficient light for threat identification at close to medium range in low light and darkness. The Wrist Light's broad MaxVision Beam, created by a precision faceted reflector that shapes the LED's output into a seamless wall of white light, is generated at three levels: 300, 60, and 15 lumens. The first two output levels are bright enough to overwhelm an aggressor's dark-adapted vision, providing a tactical advantage, and the lowest output level is perfect for tasks that don't require so much light, such as loading gear. The output sequence is user programmable to go from high to low or from low to high, whichever you prefer. There's even an optional 2211 Wrist Light Conversion Headstrap accessory (sold separately) that allows you to convert the Wrist Light into a headlamp, for tasks where you need both hands and the light source a bit farther back, such as working on an engine.

The recoil-proof, virtually indestructible LED's output is controlled via an easy-to activate, ergonomic pushbutton switch on the Wrist Light's rugged polymer body. The LED is powered by a rechargeable lithium-ion battery that's easily charged using an included micro-USB cable-there's even an integral LED fuel gauge that lets you know when the Wrist Light needs charging. For the versatility of a variable-output illumination tool that's always on you because it's strapped to your wrist, the 2211 is in a class by itself-a class literally created by SureFire!